Hot tubs are a part of life – and weddings!

Kirami was happy to be a part of two weddings in summer 2017. A Kirami hot tub played an important role at one wedding, and our bright blue buckets were present at another.

The wedding of Erja Vauranoja and Juha Jokipii was held at their home in Sastamala, Finland, on 29 July 2017. The couple made their summer wedding celebrations more personal with a Kirami hot tub.

“The hot tub is a big part of our life. We got the tub in June last year, and we’ve counted that we had bathed in it on 110 days by New Year,” says Juha Jokipii.

Their friends and families have also noticed the important role that the hot tub has in the couple’s life.

“A good friend of ours visited us and bathed in our tub in autumn 2016. This friend said that ‘if you two get married, you’ll probably do that in a hot tub, too.’ That’s where we got the idea,” Jokipii recounts.

From idea to reality

The couple already had a hot tub, and they also received a large banner from Kirami that was hung behind the tub as additional decoration. The marriage ceremony took place in the couple’s own yard: the bride and groom stood in the tub, with the priest standing beside the tub.

“I had started heating the tub early in the morning, so the water was at 36 or 38 degrees Celsius. There we stood in the water, me in my trousers. I was wearing a T-shirt at that point so that the colours of my clothes would match Erja’s dress,” Jokipii says.

The priest had never officiated at a wedding that took place in a hot tub. Hanna Ekola, who is a friend of the bride’s and who also sang at the wedding, had never been in a hot tub wedding, either.

“But she wouldn’t stand in the tub with us, and neither would the priest,” says Jokipii, laughing.

Guests were invited to bathe in the tub

It was clear from the start what the entertainment at the wedding would be like.

“Naturally, the evening celebrations included bathing and going to a sauna,” Jokipii says.

There were about 30 guests at the wedding, who also enjoyed bathing.

“At some point, there were nine of us in the tub at the same time. Some had to sit on each other’s laps. The 180-centimetre-wide tub could fit us all,” Jokipii says, praising the tub.

A relaxed wedding and wonderful memories

Jokipii says they have wonderful and unique memories of the wedding. The guests were offered relaxed wedding celebrations that represented the couple’s personalities.

“We made all of the arrangements ourselves. Of course, we had people helping us out, and the maid of honour was of great help. The people who helped with the arrangements also participated in the celebration.”

Kirami gifted the couple with the triangle-shaped Freedom outdoor fireplace that can also be used as a grill.

“The fireplace is beautiful. We often light it to create an atmosphere for bathing, and we have also grilled food on it a few times,” Jokipii says.

See all of the wedding pictures

Buckets full of happiness for the bride and groom

The wedding celebrations of Milla and Ari Salmela were held in Mikkeli, Finland, on 5 August 2017. Though the couple had already married the previous year, the marriage was blessed in the Pitäjänkirkko church in Mikkeli on their first anniversary, and the wedding celebrations took place in a restaurant, afterwards. Kirami buckets played an important role in the Salmelas’ wedding.

“I wanted to our ‘thank you’ gifts for the guests to be different – something that would be useful after the wedding.Once my friend Sari and I came up with the idea of buckets, I couldn’t let it go,” says the bride, Milla Salmela.

“The idea of buckets started out as our inside joke: ‘what wouldn’t a person do for a free bucket and marriage.’ The bride didn’t need any convincing, and since the groom also approved, we went and got the buckets,” says Sari Turunen, “the person in charge of wedding arrangements and buckets,” laughing. 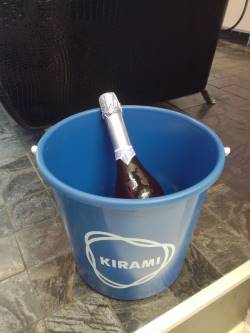 Kirami entered the picture when Turunen remembered that the company had handed out buckets at the Yard and Garden Fair in Helsinki.

“The annual Housing Fair was held in Mikkeli in the summer, and I saw an opportunity for collaboration: we would get the buckets while Kirami would gain visibility in the location of the Fair. Of course, the Salmelas also enjoy bathing in a hot tub, even though they don’t have their own tub yet, so Kirami felt like a suitable partner,” Turunen says.

Milla Salmela confirms that they are indeed dreaming of a hot tub of their own.

“We’d like to have a tub at our summer house, and maybe even at home. After the wedding, I also realised that the name Kirami has Ari’s name in it, and the first letters of my name, as well.”

The buckets were involved in many events during the celebrations, although most of them ended up in the restaurant’s cloakroom or the hotel room of the bride and groom for the duration of the afterparty. 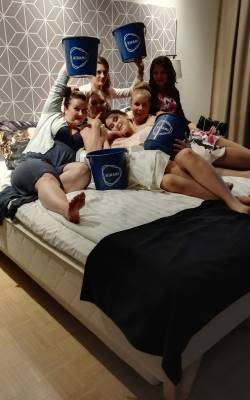 Life after the wedding

Each guest received a Kirami bucket as a gift and a memento of the wedding. During the celebrations, the guests started brainstorming ideas on how to use the buckets after the wedding.

“We were left with a few buckets ourselves, and we have used them both indoors and outdoors: we’ve carried apples in them and used them as children’s toys, seats and stands. Our friends have used the buckets to gather plums, and soon they will be used to serve punch,” Salmela lists the options.

“Seeing a Kirami bucket always makes me smile. They’re a reminder of our special day!”

See all of the wedding pictures

Hot tubs and other products from Hot-Pott.com

Our best tips for the grill season
Elitnye Kaminy sells Kirami hot tubs in the Russian market
May Day, a joyful celebration in Finland

Kirami’s Iron Monster is a robust frying plate
Sydän-Hämeen Safarit offers its customers a Kirami hot tub
Spring has arrived, it is time to start the work in the garden!