The world’s largest hot tub manufacturer, Kirami Oy from Finland, already exports more than 40% of its hot tubs. The Kirami FinVision sauna, which is sold especially to Germany, has become a new export success story. Kirami’s new branch office, the Sauna Factory, was established to ensure that the great demand could be met. This year, Kirami will celebrate its 20th anniversary with an especially positive export outlook.

At the factory of the hot tub manufacturer Kirami in Sastamala, the production has been operating at full speed since last spring. The demand for hot tubs and the FinVision modular sauna has been so high that the capacity of the former production facilities and subcontractors was no longer enough. In November 2020, Kirami opened the Sauna Factory that focuses on manufacturing the FinVision sauna as well as two hot tubs that are in high demand, the Premium Grandy XL minipool as well as the Original Tiny hot tub. The other products are still produced in the old facilities.

The FinVision sauna was launched a year ago, and most of its manufacturing was done outside the company. The sauna has become a hit especially in Central Europe and the British Isles.

“The demand for the sauna is so high that we added 500 square metres to our production facilities by buying hall space close to our own factory. Our subcontractor makes the parts and does their surface treatments, and we take care of everything else at the Sauna Factory. We can send a new FinVision sauna out into the world from the Sauna Factory every three days, which shortens our delivery times,” Kirami’s Managing Director Mika Rantanen says.

Kirami’s existing employees are currently working in the Sauna Factory, but the recruitment of new professionals will start in the spring. The branch factory will employ 5–6 people. The value of the investment is approximately EUR 150,000.

Kirami has already been working systematically for export for years, and now this effort is bearing fruit.

“We have visited international trade fairs frequently and expanded our network of resellers around the world. Thanks to our extensive network, our products have had plenty of visibility, interest in them has grown and the sales have started to increase organically,” Rantanen says.

The growth of international demand has also been partly influenced by the coronavirus pandemic, which has made people spend more time at home and invest in their comfort there.

The FinVision sauna has not been marketed in Finland at all yet, because everything they have had time to make has been exported. The largest export destination country is Germany.

“Germans are interested in Finnish products, and we have the most model pieces on display there, which definitely promotes sales. The rustic look of our yard sauna made for the yard appeals to people, because it is completely different from the traditional barrel sauna that Central Europeans are used to. In addition, the FinVision sauna is delivered already assembled, which is easy for the user,” says Taina Hujo-Oittinen about Kirami’s exports.

The Original Tiny hot tub was in the same situation as the FinVision sauna: the demand exploded so high that its manufacturing was also transferred to the Sauna Factory. The popularity of the Premium Grandy XL minipool has also increased steadily without marketing. 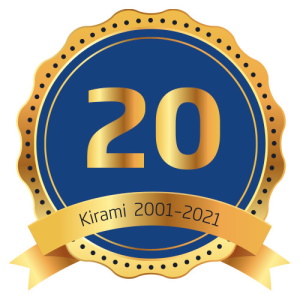 In 2021, Kirami will reach its 20th year. Mika Rantanen says that the time has passed quickly.

“Everything feels really great right now. We’re still alive, and there has been growth nearly every year. When we started, we didn’t even dare to think that one day we might be the largest hot tub manufacturer in the world, but in 2006 it already started to feel possible.”

More information about the Kirami FinVision sauna can be found on the website.

Images of the products

Established in 2001, Kirami Oy is a family business known for its high-quality pools and hot tubs. Kirami delivers approximately 10,000 hot tubs each year, which makes the company the largest hot tub manufacturer in the world. The Outstanding by Kirami product family expands the product selection to include garden decorations, grills and outdoor fireplaces. The company employs 30 people and its turnover is EUR 16 million. www.kirami.fi, www.outstanding360.fi