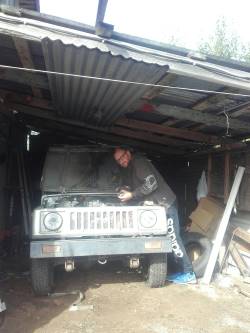 Sami Eskola,takes care of maintenance at Kirami. Sami originally came to work at Kirami in 2014 through a current colleague of his. When Kari heard that Sami had become unemployed from his previous job in the trade sector, he asked if Sami was interested in working at Kirami, because they needed someone to replace their previous maintenance man, who was retiring. Sami had asked another current colleague, Antti, about a job approximately six months earlier, but there had been no vacancies at the time. In the job interview with Mika, Sami found that the job had been planned for him all the way to the start date; the only concern was his lack of a lorry licence. Sami sorted the issue out through apprenticeship training and acquired the necessary qualifications. When the apprenticeship training was over, Sami signed a permanent employment contract.

Sami’s tasks include a variety of things, such as the duties of a maintenance man and driver, as well as real estate maintenance, other kinds of maintenance, repair and technical support duties, and sometimes he also does sales. During a rush, Sami may also help his colleagues out on the production line so that the tubs can be completed within the agreed deadline. Sami has said that no two workdays are the same! He likes the work because it is multifaceted, and because he can do things with his hands. The best thing is problem-solving, even if some issues can seem baffling, because you have to learn new things and there are no ready-made solutions for everything. The work community at Kirami is excellent. “We have a great team spirit, and there aren’t any humourless people here,” Sami says. He says that he is proud to be involved in making and developing the Kirami brand.

In his free time, Sami follows the soccer hobby of his daughter and son. Both of them play with the Lauttakylän Luja soccer club. Sami is actively involved in the club whenever necessary. Supporting the children in their sports activities as a parent is extremely important because it creates a good relationship, both while the children are growing up and during the rest of their lives. In addition, Sami has time to spend time on his own hobbies, such as boating and building his own boats. In the winter, his building (or customisation) activities involve snowmobiles, and of course he has to drive them sometimes too. You may spot Sami in Karvia, because it has good tracks for driving a snowmobile.

You can find the Karvian Kelkkailijat snowmobile association here (in Finnish)

Franken SPA: Huge exhibition of Kirami products
Football enthusiastic sailor at the Turku office
A "sports-mad" export salesman who cares about helping others
From a travel agency via a bank to Kirami
Valtteri Bottas enjoys the Kirami FinVision sauna

Hot tubs and other products from Hot-Pott.com – A family business since 2013

Minipool “GRANDY” combines the best features of a hot tub and a swimming pool
Our best tips for the grill season
Elitnye Kaminy sells Kirami hot tubs in the Russian market
May Day, a joyful celebration in Finland

Kirami’s Iron Monster is a robust frying plate
Sydän-Hämeen Safarit offers its customers a Kirami hot tub
Spring has arrived, it is time to start the work in the garden!
Kirami’s Red Cedar range adds warm-hearted luxury to hot tubbing